Steel luxury: the history of the Patek Philippe Nautilus watch

Patek Philippe introduced the first Nautilus (Ref. 3700) in 1976 and has since become one of the most sought after in its history. The collection is replenished and updated to this day, providing an influx of new people who want to buy the original Patek Philippe of this particular model. Interestingly, at the time of the creation of Nautilus, it was not the first sports watch in the luxury category on the market (the first was Audemars Piguet Royal Oak in 1972), but it sold at an even higher price and, as emphasized in the advertisement, was the most expensive watch in steel the case. This approach could not fail to attract attention, as well as the remarkable shape of the new model's case - the octagonal bezel with rounded edges and the 42-mm diameter were in a way ahead of their time.

Gerald Genta, designer of the Royal Oak and Nautilus, offered his sketches for a new model to Patek Philippe in 1974. The unusual, memorable shape, the original concept and the steel case did not fit into the line of Patek Philippe products at all: mainly gold watches with high complications, but two years later the model was launched into production. The name Nautilus was chosen in honor of the submarine from Jules Verne's novel "20 Leagues Under the Sea" and reflected the impressive protection from water up to 000 meters for that time.

Initially, the demand was low, but in 1980, with the introduction of the women's version of this model with a quartz movement, this changed a lot. A year later, a medium-sized male version was introduced (Ref. 3800, 37 mm in diameter). 1996 brought the Nautilus a design with Roman numerals and a smoother dial, and gold versions of the case soon followed. The original 42mm version of the Nautilus was discontinued but continues to be auctioned off at the highest price to this day. A remarkable achievement, though not surprising given how many people are eager to buy Patek Philippe watches and how many of them are passionate about collecting.

In 1998, an updated Nautilus model was presented in a 42-mm case, but with Roman numerals and a power reserve indicator (Ref. 3710). A more sophisticated version of the watch was presented in 2005 (Ref. 3712), it was equipped not only with a power reserve indicator, but also with the date and moon phases, located asymmetrically. This model was updated the following year. 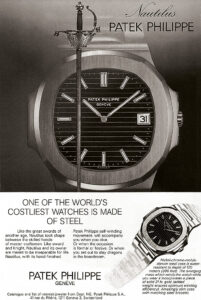 In 2006, the brand celebrated the 30th anniversary of the Nautilus collection by adding a rounder case with a redesigned design, now featuring a classic three-piece structure that, thanks to advances in technology, provided the same water resistance. A transparent case back has also been added so that you can observe the movement of the caliber, and the bracelet design has been updated to give it a more modern look. In the same year, a 43 mm model (Ref. 5711) was introduced, a classic three-hand watch in a steel case with a dark blue dial and a caliber 315 SC inside. A worthy successor to the original model, it was a great success with buyers, demand exceeded supply, so, as in the case of the Rolex Daytona, the watch in the secondary market was 50% more expensive than in the original boutiques, and this is at the original price of $ 29 ... Everyone wanted to buy the original Patek Philippe, while the brand couldn't keep up with so many orders.

2006 also gave all fans of the model a new version of their favorite watches, now with a chronograph - the Nautilus Chronograph, equipped with a new caliber 28-520 C (Ref. 5980). The collection's anniversary in 2016 was marked by the release of two limited edition models: the platinum version Ref. 5711 and chronograph versions in white gold cases increased to 44 mm in diameter. Despite their high price tag, they also sold out very quickly.

The latest significant update to the collection has added a perpetual calendar to the watch. Apparently, the popularity of the model will not decline for a very long time, so the abundance of those who wish buy Patek Philippe watch will maintain a high price for both new and used models. And we just have to wait for updates from the brand and, maybe, replenish our collection with rare or new items that you can find in our watch store.