Split chronographs, aka rattrapants, allow you to measure the time of two parallel events, for example, a race of two runners, thanks to the presence of two independent seconds hands. One of these hands, the so-called ratttrapant or split-hand, is located directly above or below the main chronograph hand, they start moving at the same time, but when you press the button, the split-hand stops while the main hand continues to move, which allows you to read the result. and pressing it again instantly moves it to the main one, so they continue to move in parallel. In recent years, this complication has become more and more popular, with split chronographs appearing in a wide variety of brands. Today we will pay attention to three models, one way or another stand out from the general mass.

The first of these was launched in 2017 - the limited edition IWC Portugieser Rattrapante Chronograph was sold exclusively in select boutiques around the world. The list of such boutiques includes stores in Geneva, Munich, Paris, Milan and Vancouver, and each model was slightly different in order to meet the aesthetic preferences of the target audience of the boutique. One of the most exquisite variations went to the Geneva store - a limited edition of 50 pieces, the watch was engraved with the name of the anthem of Geneva in 1602 "Cé qu'è lainô" on the case back. The first split-chronograph in the Portuguese collection came in 1995, when Richard Hubring invented the split-mechanism for the legendary Valjoux 7750 caliber. 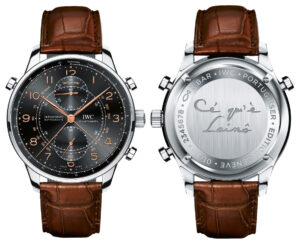 Connoisseurs of high complication will surely appreciate the Patek Philippe Ref. 5372P Grand Complication Platinum Case. The model is interesting not only for its attractiveness and excellent movement, but also for the fact that it represents the next stage in the development of chronographs of the legendary independent brand, which began in 2017. The last update before it happened in 2012 with the modern classic Ref. 5204. The new version retains the perpetual calendar function, while increasing the complexity of the split-chronograph mechanism with a single control button. The look of the dial has also changed: the mini-dials of the chronograph, located at the 3 and 9 o'clock positions, have built-in indicators of the day of the week and month; the date indicator moved down the dial, while the moon phase indicator took place at the 12 o'clock position. Small apertures on either side of the date display indicate leap year and day and night, respectively. The diameter of the case has also decreased slightly, so it is now 38,2 mm instead of 40,2. The watch is available in two designs: a blue sunray dial with gold numerals or rose gold with a vertical satin finish.

A more restrained sports model was released by the A. Lange & Söhne brand. The Triple Split watch is the world's first mechanical split-chronograph that can also carry out many hours of comparative time measurements. The watch's ability to measure and compare time intervals up to 12 o'clock is achieved by using additional split hands on the mini-hour and minute dials. When turned off, the seconds, minute and hour hands are aligned and do not overload the dial. The model is limited to 100 pieces and has an 18-carat white gold case.

If you want to buy new or rare models from IWC, Patek Philippe or A. Lange & Söhne at a bargain price, take a look at the range of our store. We offer to buy Swiss watches at a price below market prices and provide documentary evidence of the authenticity and condition of each model in stock. Allow yourself a precise and status accessory today!