The final cost in ruble equivalent and the availability of goods, ask the manager before buying.

Additional discount for the purchase of this product in Trade-In

In 2001, Harry Winston launched the Opus series, a new creative initiative designed to revolutionize and change time. Partnering with the industry's most respected independent watchmakers, each Opus reflects an unprecedented journey of collaboration and innovation, resulting in revolutionary timepieces that no partner could have imagined alone. 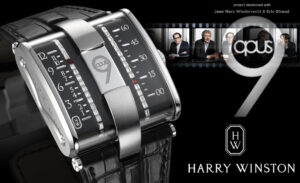 One of the creators of the famous Tourbillon Glissiere Harry Winston, independent architect and designer Eric Giroud, talks about the Opus 9 concept: “The idea of ​​Opus 9 came to me during my vacation at sea. The starting point was cleanliness. I wanted to add light and transparency to the hull, inspired by the way sunlight hits the water. " The two halves of the body are designed around a central bridge called the "vertebra" to provide shock resistance and complete component stability. “The body is rounded like the corners of Bauhaus buildings,” says Eric Giroud

Opus 9 is pure and precise, and embodies impeccable watchmaking down to the essentials. Classic watchmaking technologies that optimize function and shape have been flawlessly redesigned and refined to show the time in a different way. The second author of the cult watch - Jean-Marc Wiederrecht, winner of the Geneva Grand Prix in the nomination "Best Watchmaker 2007", who first took part in the development of watches for Harry Winston back in 1989, was responsible for the movement. In keeping with the DNA of Harry Winston watches, technical innovation is combined with the highest quality diamonds. Definitely modern Opus is a new abstract expression of time. Linear time is imprinted in diamonds

In Opus 9, diamonds are not just a decorative element, but a functional element of time. Instead of traditional hour hands and a circular dial, the time is displayed in two parallel diamond chains indicating the hours and minutes. Each of the sleek and sparkling chains is set with 33 baguette-cut diamonds, the signature shape of Harry Winston. The vibrant tangerine garnets are strategically placed to indicate the hours and minutes. Carefully calibrated, each stone is perfectly inserted into the links to provide movement while maintaining their luster. Chains made of brass provide maximum mobility with minimum friction. Thanks to the legendary "invisible setting" of Harry Winston diamonds, the gems appear as floating lines of light that smoothly unfold around the dial. Maintaining the minimalist style of the display, the chains are driven by a powerful automatic movement hidden inside the case. By converting the rotation time into linear time, the gear mechanism creates the lateral drive required for continuous sliding motion. Despite its apparent simplicity, exceptional balance and mechanical precision are essential to mobilize the weight of diamond chains. Although chain mechanisms have been studied before, the added weight of diamonds presented a new technical and functional challenge. But Jean-Marc Wiederrecht handled it with ease

Linear indication of hours and minutes using "chains", the links of which consist of diamonds and 6 garnets. On the diamond chain on the left, you can read the current hour, and on the chain on the right, minutes. A total of 66 Top Wesselton Baguette diamonds (+/- 2,148 carats) and 6 tangerine garnets (+/- 0,222 carats) were used for this watch. The famous invisible setting of stones from Harry Winston - that's why diamonds seem to merge in lines of light and seem to float above the dial

In 2009, the Grand Prix d'Horlogerie de Geneve presented Harry Winston with the Design Watch Prize in recognition of the technical and aesthetic excellence of Opus 9. This timepiece, already iconic in every sense, is the epitome of excellence, extravagance and expressiveness. 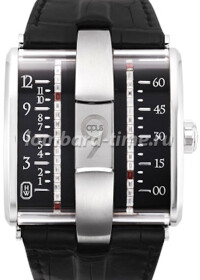