At the end of August at Geneva Watch Days, Ulysse Nardin presented a new collection called Blast. All watches are equipped with a new self-winding skeletonized caliber with a flying tourbillon and a new one-click folding clasp, and the lines of the multifaceted case are inspired by stealth aircraft. A week later, Ulysse Nardin presented another model of the Blast line, this time belonging to the jewelry segment of the watch industry. Both the case of the novelty and the open movement with a tourbillon are studded with diamonds of various geometric shapes, folded into a sparkling mosaic.

The new Sparkling Blast is limited to only three pieces and features a 45mm white gold case. The watch comes with a white rubber strap or a deep blue alligator leather strap. Each piece contains 211 hand-cut diamonds: around the entire case, crown, bezel, open dial, indexes and hands - 85 of these diamonds have a unique shape. The total weight of the watch is thus 13 carats. The dial of this model can only be described with the words “shape in shape in shape”, since you can clearly see the X on it, framed in a rectangle inscribed in the bezel circle. 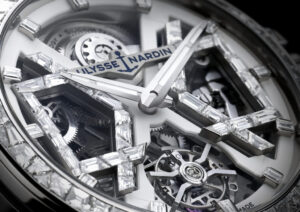 According to the manufacturer, the hull design and distinctive triple lugs were inspired by the stealth fighter's wings, which make them invisible to radar.

The diamonds are encrusted using the invisible fastening technique, which was invented in France 200 years ago. With this technique, the fasteners are completely invisible from the outside, which gives a neat and solid look to the composition. All diamonds in the watch comply with the World Diamond Council's guarantee system and are certified to have been purchased from legitimate sources, not involved in funding conflicts, and in accordance with UN resolutions.

Like the Executive Skeleton Tourbillon and other models in the Blast collection, the Sparkling Blast is equipped with a skeletonized UN-172 caliber with a 72-hour power reserve. This movement is an updated version of the Ulysse Nardin caliber 171. The caliber consists of 137 parts, 23 of which form the tourbillon.

If you want to buy a Ulysse Nardin watch new or rare models at a bargain price, pay attention to the range of our store. We offer to buy Swiss watches at a price below market prices and provide documentary evidence of the authenticity and condition of each model in stock. Treat yourself to a precise and status accessory today