The final cost in ruble equivalent and the availability of goods, ask the manager before buying.

Additional discount for the purchase of this product in Trade-In 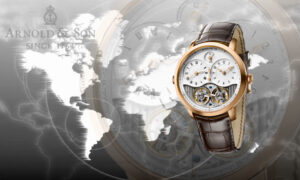 Arnold & Son presents the DBG watch that harks back to John Arnold and his son's heritage in watchmaking. The acronym DBG stands for two major complications: Double Balance and GMT. The model is powered by the A&S in-house caliber 1209. This superbly engineered in-house wristwatch is an Instrument Collection ambassador, combining the avant-garde of movement with impeccable classic style.

A masterpiece of perfect symmetry, the Instrument DBG Equation GMT is equipped with two separate time indicators, each driven by its own cylinder and gear train with its own escapement and balance. This highly unusual technical specification allows the two displays to be configured independently of each other. Although this seems to be a standard function of the watch - to display two or more time zones so that the hour hands are set at different times, the ability to set the minute hand opens up additional possibilities. This means, for example, that the display can be configured to show the exact time in zones that differ from GMT by a fraction of an hour, for example, by a quarter or half. In addition, the subdial at 12 o'clock shows the equation of the two time zones in 24-hour format. This feature allows the owner to see the time difference between the two zones, as well as to determine whether it is day or night in the second zone. Both time zones share a common second indication - in the form of a long thin hand emanating from the center of the dial, which is a hallmark of the new collection of Arnold & Son's Instrument

The double barrel escapement watch has a long tradition in watchmaking, but it is difficult to find it today. The principle of "doubling" is ideal for the Arnold & Son's Instrument line, because the double cylinder / gear and balance / escapement allows the watch to combine multiple complications without affecting the accuracy of the other or draining its energy. Therefore, the mechanism is ideally adapted for use in a second time zone. Another practical benefit of having a double drum / gear and double balance / escapement is the fact that it allows two completely different technical solutions and characteristics for each complication to be combined in the same movement.

No less impressive than the technical characteristics of the watch is its aesthetic appeal and, in particular, its symmetry, which is largely determined by the arrangement of the elements of the double movement. The sophisticated dial, where, against the background of the Cotes de Geneve stripes, on the lower half, two "three-arm" balances are visible, fixed by two taps facing each other and merging together to form a circle, has an absolutely mesmerizing magnetism. The overall sense of balance is completed by two crowns: one at its normal position at 3 o'clock and the other at 9 o'clock. Both springs are wound with the crown on the right. However, the time in each of the two selected time zones is set using its own crown, which ensures that none of the zones is moved or changed intentionally. The time zone on the left is set with the crown at 9 o'clock, and the time zone on the right is set with the crown at 3 o'clock.

Arnold & Son Instrument DBG 1DGAP.W01A.C120P is a particularly rare and extremely complex watch from the super-prestigious and highly regarded manufacture Arnold & Son, founded by the legendary London watchmaker John Arnold, who together with Breguet invented the art of watchmaking in the form in which we are we know today 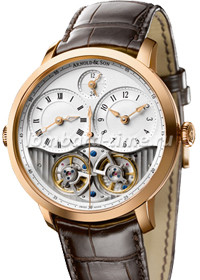