It seems that the world of watchmaking won't get greener, but this impression can be deceiving. Previously, it was impossible to imagine such a number of green dials, which are presented on the watch market now, and the trend for green is quite stable in the industry.

Despite this, it is difficult to imagine that one day green will move blue on the pedestal - the undisputed favorite of the watchmaking world, present in almost every collection. The fact is that green color, unfortunately, has very ambiguous connotations - it is associated with spring, greenery and the flowering of vitality, and reminds of diseases (after all, our skin often acquires a greenish tint when we are sick), poisons, unpleasant creatures (monsters are often described as having green skin) and mildew. The opposite of red - the color of blood and therefore health - green can draw attention to an unhealthy skin tone or simply not go with it. At the same time, in contrast to the calm blue, which occupies a position akin to gray, green attracts attention and is not always present in the wardrobe, so not everyone can harmoniously choose a green element of clothing for their watches.

In general, individualists usually choose watches with a green dial. This is facilitated by the huge number of shades of green used in the watch industry - no one can say what a "standard green" color is, which means that you can easily find exactly the shade that will reflect your idea of ​​it.

Audemars Piguet Royal Oak Offshore Diver - a model from the most colorful line of the Audemars Piguet brand, boasts not only the ability to dive up to 300 meters, but also an unusual khaki color. The 42 mm stainless steel case, complete with a rubber strap, houses the in-house automatic caliber AP 3120.

The Hublot Classic Fusion Green model is similar in color to the previous one, but rather goes into an olive shade. Considering the color palette of Hublot watches, green simply could not but appear in their collection. This model is marketed as unisex and has a 38 mm titanium case with an automatic Sellita SW300 caliber inside.

This elegant model with a South African malachite dial is launched by the Omega brand. The Seamaster 300 Malachite is available in two versions: the first combines a green mineral dial with yellow gold on a 41mm case and bracelet, and the other in platinum. Hidden inside is the automatic Master Chronometer caliber 8913.

Futuristic brand MB&F also took note of the “green” trend and presented the HM7 Aquapod model. The previous model of this line with the blue luminescent diving bezel already attracted attention, but it is simply impossible to look away from the green model. The brand remains true to its concept of combining fine watchmaking (for example, the flying tourbillon is used in this watch) and playful unusual design. The titanium case of the original, limited to 50 pieces, is equipped with an automatic in-house caliber. 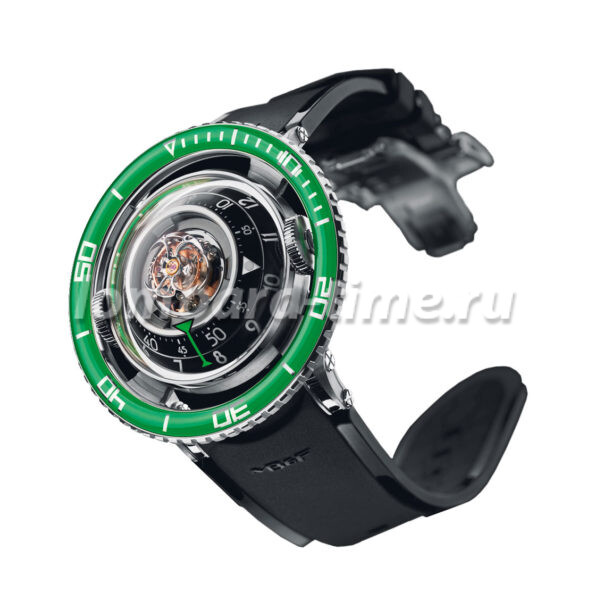 The green color of the Chopard Mille Miglia Classic Chronograph Racing Colors is motivated by thirty years of partnership with the Mille Miglia rally. In honor of the anniversary, the brand unveiled five chronographs in historic racing car colors - these shades were developed for racers from around a century ago. The green model is presented in the color of the British racers - British Racing Green. The 42 mm steel case houses the automatic chronometer caliber ETA 2894. 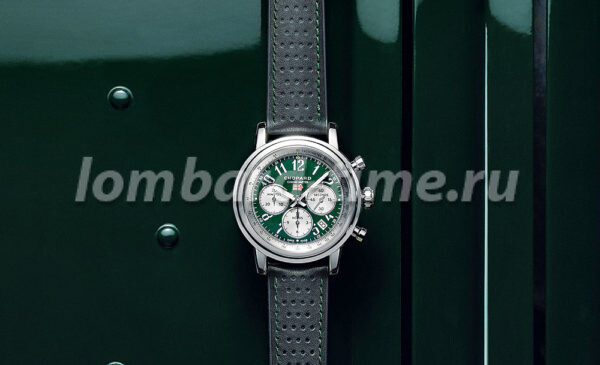 Finally, the green version of the Glashütte Original Sixties Panorama Date delights not only with an attractive emerald hue, but also with a sunburst pattern applied with lacquer, which, together with a degradation effect, creates the feeling of a supernova explosion captured on the dial. The brand keeps a secret how they managed to achieve such an effect, frustrating competitors, and their customers are simply happy with the attractive look of the accessory. The in-house automatic caliber 42-39 ticks away in a 47 mm steel case. 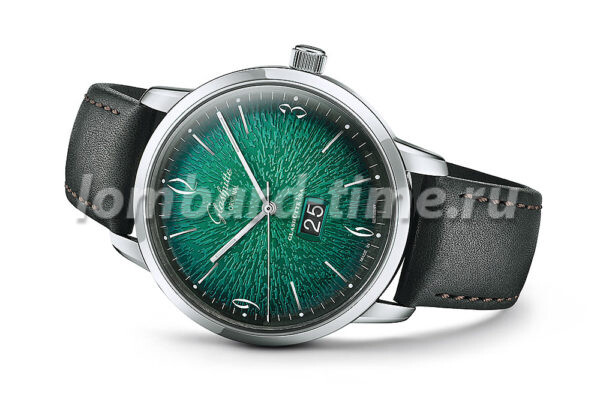 If you want to buy Audemars Piguet watches, Hublot, Omega, MB&F, Chopard, Glashütte Original new or rare models at a bargain price, take a look at the range of our store. We offer to buy Swiss watches at a price below market prices and provide documentary evidence of the authenticity and condition of each model in stock. Allow yourself a precise and status accessory today!